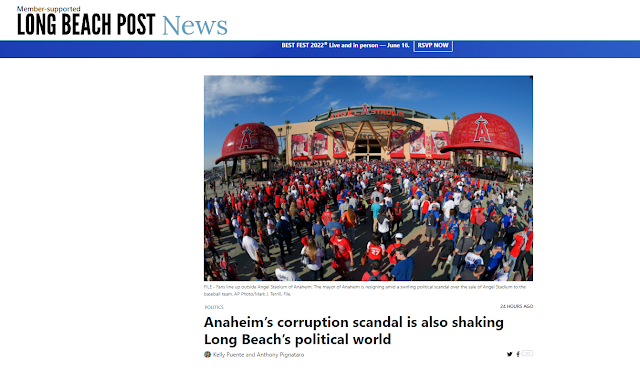 Long Beach, CA – Upon learning that the same political consultant being investigated by the FBI in a criminal corruption case in Orange County has been working and contributing to several elected officials in Long Beach, Attorney Gerrie Schipske, candidate for City Attorney issued the following statement:

The chief duty of the City Attorney is to protect the City from liability. The Long Beach City Attorney must investigate all votes cast by these elected officials to determine if prior to these votes they received political or officeholder contributions from anyone connected with the political consultant or her other clients.

It has also been disclosed that one of the clients of the political consultant named by the FBI is the Chief Development Officer of Urban Commons who was given the contract by the City Council to operate the Queen Mary and has defaulted on the contract. It is critical that the votes concerning this contract be examined to determine if any money was received by those voting to give the contract to Urban Commons.

We need to restore the public trust and confidence in our local government which is why I have made Anti-Corruption my top priority in my campaign for City Attorney. I am the ONLY candidate to do so.

As City Attorney, I will require that all elected officials disclose if they have received contributions of any kind from anyone connected with an item on the Council agenda.  If they have, they will be recused from voting, and it will be announced during the Council meeting.

Attorney Gerrie Schipske, candidate for City Attorney, is a fierce advocate for open, transparent, and accountable local government. Because of her work on the Long Beach City Council for 8 years, she was named at the White House as one of only seven “Champions of Change for Open Government.” Her complete Anti-Corruption plan is included on the following website:  www.trustgerrie.com or https://www.flipsnack.com/E5D6BD77C6F/anti-corruption-tool-kit-final.html