Celebrate Law Day with Gerrie Schipske for City Attorney. Get a Law Day Comic Book and Win a Chance for an RGB Action Figure. 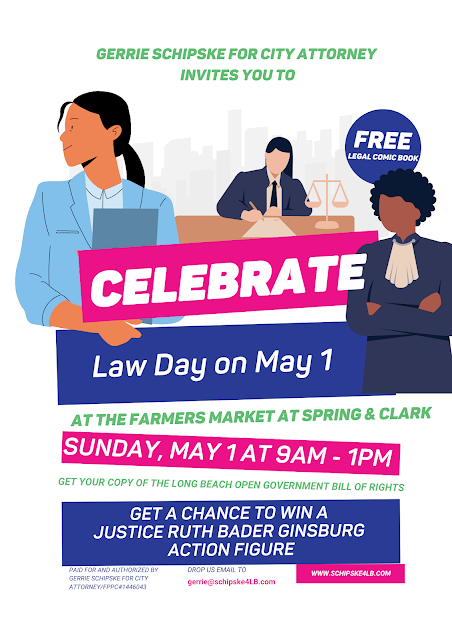 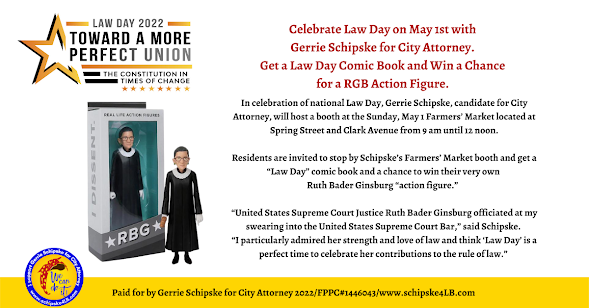 In celebration of National Law Day, Gerrie Schipske, candidate for City Attorney, will host a booth at the Sunday, May 1 Farmers’ Market located at Spring Street and Clark Avenue from 9 am until 12 noon.

May 1, 2022, is the annual national Law Day established in 1958 by President Eisenhower to celebrate the rule of law. Law Day provides an opportunity to understand how law and the legal process protect our liberty, strive to achieve justice, and contribute to the freedoms that all Americans share.

Residents are invited to stop by Schipske’s Farmers’ Market booth and get a “Law Day” comic book and a chance to win their very own Ruth Bader Ginsburg “action figure.”

Gerrie Schipske is running for City Attorney to establish the strongest “Anti-Corruption” effort to root out unethical or illegal conduct by City elected officials, employees, and those who contract with the City.

“I took an oath that as ‘an attorney and as a counselor of the Court, that I will conduct myself uprightly and according to law, and that I will support the Constitution of the United States,’ “says Schipske. “I expect all public employees and elected officials of Long Beach to conduct themselves ‘uprightly and according to law.’ Corruption erodes the public’s trust.”

Schipske says that she will also be providing information on her “Long Beach Open Government Bill of Rights” which inform voters about their legal rights to an open, transparent, accountable, and not to mention, ethical City government.