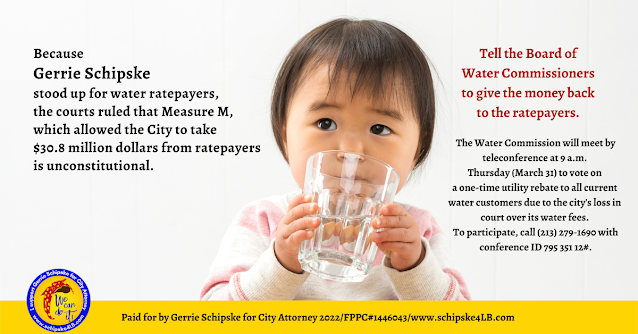 Gerrie Schipske, candidate for City Attorney, today urged Long Beach water ratepayers to contact the Long Beach Board of Water Commissioners and demand a refund of the more than $30 million illegally transferred to the city’s general fund.

The Water Commission will meet by teleconference at 9 a.m. Thursday (March 31) to vote on a one-time utility rebate to all current water customers due to the city's loss in court over its water fees. To participate, call (213) 279-1690 with conference ID 795 351 12#.

The Board agenda item specifies that: "Approve a one-time utility rebate to all current water customers of the Long Beach Water Department, to be applied evenly per customer account in a total amount not to exceed $9 million and direct the General Manager to take such actions as necessary to provide the rebate."

“The courts very clearly ruled that the 12% surcharge placed on water rates through Measure M violated the State Constitution,” says Schipske, who was co-counsel on the case Lejiins vs. City of Long Beach.

“Not only did the Water Department increase water rates to pay for the 12% surcharge but the City then taxed the increased rates with a 5% utility users tax. The ratepayers are owed a refund.”

Schipske, who warned the City that Measure M was illegal when she co-wrote the ballot argument against Measure M, cautions that water rates were specifically increased to pay for the City’s 12% surcharge.

Under the City Charter, the Board of Water Commissioners can only transfer funds to the general fund of the City, if and when, in the judgment of the Commission, such monies are no longer necessary for the purposes of the Commission.­­­­