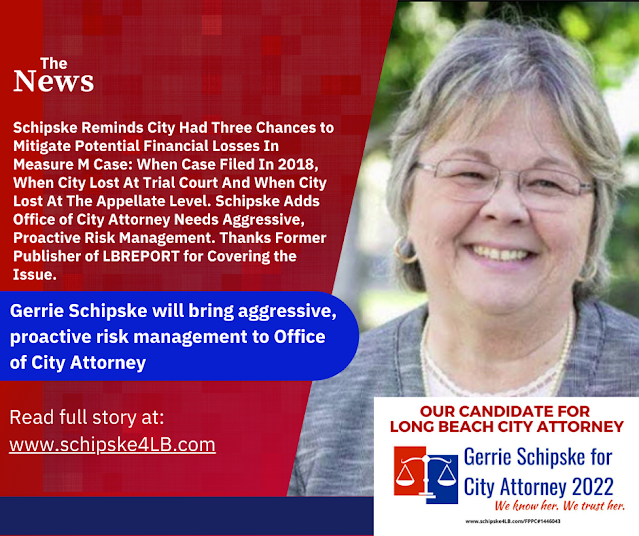 Schipske Reminds City Had Three Chances to Mitigate Potential Financial Losses In Measure M Case: When Case Filed In 2018, When City Lost At Trial Court And When City Lost At The Appellate Level. Schipske Adds Office of City Attorney Needs Aggressive, Proactive Risk Management. Thanks Former Publisher of LBREPORT for Covering the Issue.

Following the decision of the California State Supreme Court not to review the rulings of the Appellate and Trial courts that Measure M is unconstitutional, Gerrie Schipske, candidate for City Attorney today reminded the City Attorney that he had three chances to mitigate any potential financial losses.

“The moment litigation was filed against Measure M, the City should have stopped imposing the 12% surcharge on water rates and transferring money from the Water Department,” says Schipske who was co-counsel on the case titled “Lejiins vs. City of Long Beach.”

“When we won the case at the Trial level which ruled that Measure M is unconstitutional, the City ignored the potential risk of continuing imposing the surcharge and transferring the money. It should have stopped both. But it did not and even ignored the risk after the Appellate Court upheld the ruling.”

“This why as the next City Attorney I will bring aggressive, proactive risk management so that the City can prevent instead of just paying out large settlements.”

Schipske expressed gratitude to the former publisher of www.LBReport.com, Bill Pearl, for his many articles which chronicled why the decisions of the courts were correct.

“From the start of the City proposing the illegal Measure M, Bill Pearl tried to inform readers why the City was headed for trouble,” says Schipske. “Just look at the following links of articles he published. No other media source was covering the issue.

“I wish he was here to see that he was right,” notes Schipske.

The case was handled by Benink & Slavens, whom Schipske had contacted in 2018 when the City proposed Measure M. “I felt that Measure M was illegal just as was the imposition of fees on city pipelines that were passed along to ratepayers. You cannot raise water rates to pay for anything but water-related services.”

Schipske says that she appreciates the expertise of Benink & Slavens and their dedication to the premise that “local governments are not above the law and California taxpayers need protecting from unscrupulous local government spending.”

Schipske added that the ruling should be instructive to the City Attorney, particularly since the Mayor and City Council were allowed to send out flyers and emails to voters that did not provide accurate information. These communications assured voters that Measure M was “not a tax,” the transfer of funds “would be taken from surplus,” and “would not raise water rates.” None of that was legally correct.

When asked what she will do differently as City Attorney, Gerrie Schipske responded, “I will create a ‘Legal Exposure Reduction Committee’ that will establish an annual Citywide and departmental legal exposure reduction goal; create proactive City Attorney procedures to advise departments on various methods to reduce legal costs; create procedures to discuss areas of potential exposure; develop and implement specific strategies calculated to prevent future claims and lawsuits; provide updated training on new changes in laws and policies for each appropriate department to implement; assess the efficacy of corrective action plans; review management training and implementation of City policies; review lessons learned; discuss areas of potential exposure, and report annually on their progress and efforts.”