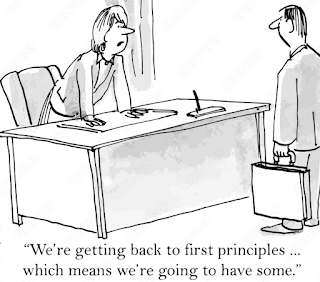 Gerrie Schipske today announced she was entering the race for Long Beach City Attorney. Schipske pivoted from her look at the mayor’s race after voters expressed concern that no one was challenging the hand-picked successor to the retiring City Attorney. They also voiced their support for Schipske’s reform platform that can be better accomplished in the Office of City Attorney. Schipske is an experienced attorney and former Fifth District City Council Member who won recognition from the White House for her fierce advocacy of open government.

She issued the following statement:

Residents are angry about being used as ‘piggybanks’ to fund project after project that doesn’t work. They are sick of elected officials who place political ideology or their relationships with lobbyists ahead of the residents.

Voters ask, who will protect their interests and tax dollars? I will.

My record on the City Council speaks for itself. I fought for an open, transparent, and accountable government. I stood up against those politicians who wanted to raise parcel taxes and water utility rates. I worked to make neighborhoods safer and reached out to assist small businesses. As a City Council Member, I did everything I could to protect the peoples’ interests and hard-earned dollars.

As City Attorney, I will focus on rooting out corruption; neighborhood protection; aggressive, proactive risk management; fiscal responsibility and accountability.

The people deserve better. Democracy demands that voters have a choice of candidates and public debates of the issues in every election. Otherwise, elected officials are not accountable. 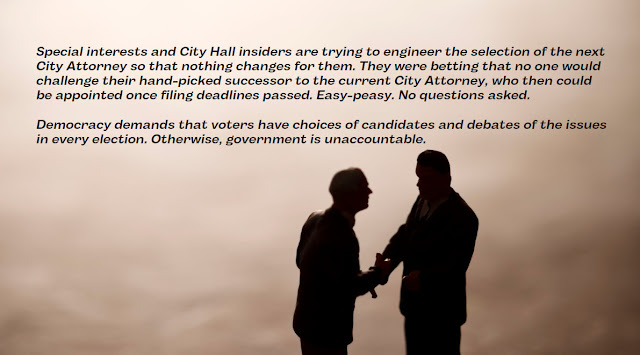 I caution voters that the special interests will spend a lot of money to stop my election because of the reforms I am proposing. The Long Beach Police Officers Association (LBPOA) is at the top of that list of special interests.

The LBPOA is the certified bargaining unit representing police officers. LBPOA has sued the City of Long Beach several times attempting to block the public release of the names of officers in officer-involved shootings, despite a court order to release them. The City Attorney defends the City against these lawsuits. 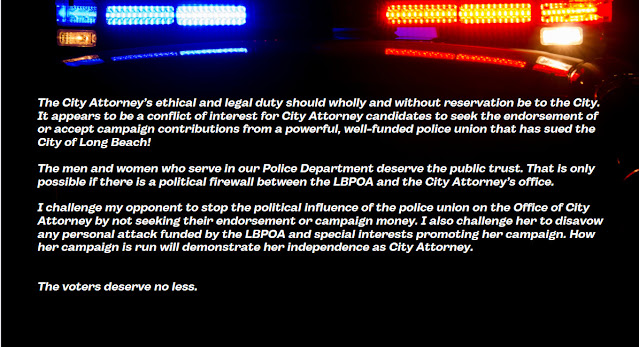 I believe that police unions are unique from other labor unions and special interests. No other group carries a badge and a gun and faces situations in which they may have to use force, the legality of which will ultimately be defended by the City Attorney.  The same cannot be said of firefighters and other public employees.

As a City Councilmember, I fought for funding and higher staffing levels for the Long Beach Police Department. I know their job is difficult and necessary, especially in these times of increasing crime. I also know we need to restore public trust and confidence in our system.

The City Attorney’s ethical and legal duty should wholly and without reservation be to the City. It appears to be a conflict of interest for City Attorney candidates to seek the endorsement of or accept campaign contributions from a powerful, well-funded police union that has sued the City of Long Beach!

The men and women who serve in our Police Department deserve the public trust. That is only possible if there is a political firewall between the LBPOA and the City Attorney’s office.

I challenge my opponent to stop the political influence of the police union on the Office of City Attorney by not seeking their endorsement or campaign money. I also challenge her to disavow any personal attack funded by the LBPOA and special interests promoting her campaign. How her campaign is run will demonstrate her independence as City Attorney.

The voters know and trust me. I look forward to continuing my pursuit of transparent, fiscally responsible, more accountable government in Long Beach as City Attorney. The voters deserve no less.